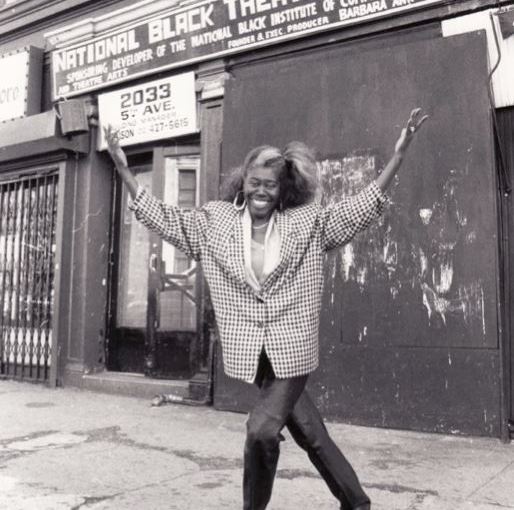 “Black Art is a healing art, and It has the ability to heal the world.” – Dr. Barbara Ann Teer

After her studies, she moved to New York to further her career.  There she starred in numerous shows both on Broadway and Off-Broadway.  She was dance captain in the Tony Award nominated, Kwamina; and won a Drama Desk Award for her role in Home Movies. Her acting earned her many accolades, and despite her great success, she decided to leave ‘mainstream theater’ due to its lack of diverse roles for African-Americans.

In 1968, Dr. Teer wrote in a New York Times article, “We must begin building cultural centers where we can enjoy being free, open and Black.  Where we can find out how talented we really are, where we can be what we were born to be and not what we were brainwashed to be, where we can ‘blow our minds’ with Blackness.” That same year, she founded the revolutionary National Black Theatre in Harlem, an institution devoted to the support and promotion of Black Art, Black Artists, and the Black Community. Her theater was an influential institution during the Black Arts Movement, often referred to as the artistic branch of the Civil Right Movement. Those in the Black Arts Movement through artistic expression: poetry, dance, theatre, etc. fought against injustices by celebrating the multifaceted nature of Black Culture and History.   Though the Black Arts Movement began in New York, its influence would spread nationwide. Dr. Eugene Redmond, also of E. St. Louis, is a noted leader of the Black Arts Movement in the Midwest.  The National Black Theatre was a success, touring in Haiti, South Africa, Trinidad, Bermuda, Guyana and throughout the United States. 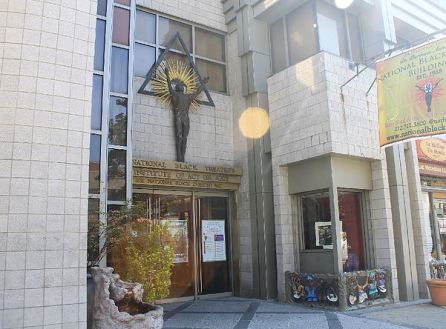 Dr. Teer sought to uplift not only the image of the African-American, but also the Harlem Community.  She succeeded in both. Because of her success, she has been awarded several honorary Doctorate degrees.  The National Black Theatre is currently in its 47th season, and thriving under the tutelage of Dr. Teer’s daughter Sade Lythcott.  If you visit New York try to visit the theater started by one of your Legendary Locals, Dr. Barbara Ann Teer.  For more on the theater, visit nationalblacktheatre.org. 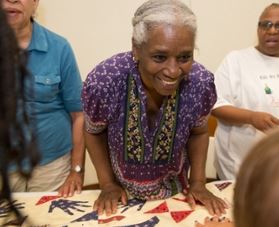 Her quilts tell a story that weaves through the fabric of experiences of all mankind.  Her artistry speaks of our history, our triumphs and our weaknesses.  For this reason, Edna Pattinson-Petty’s work is extolled not only in her hometown or even America, but by people in foreign lands, such as Beijing, China; Senegal, Africa; Ottawa, Canada; and Islamabad, Pakistan, who identify with her work which exemplifies ‘the human condition.’ Whether it is her latest quilt, created to educate on the deadly 1917 Riots of E. St. Louis, which symbolizes the cruelties of mankind; or her quilt, “If it Wasn’t for the Women,” which was constructed to represent the strength of all women, there is a visceral connection to her art that supersedes religious, ethnic and racial boundaries.  Her works speak a universal language that isn’t muddied by words. She says of her gift, “I know that my creative ability is of divine inspiration, because I dream art, I feel art, I get excited when I am around art, and through my creations I reveal my internal world.”

Though she is known for her quilts, one of which, “Road to Redemption”, was exhibited in Washington D.C. for the celebration of President Obama’s Inauguration, her artistry extends beyond fabric work.  She has works displayed throughout the St. Louis Metropolitan area.  She created mosaic tiled benches in Jones Park in E. St. Louis.  When the Southern Illinois University, E. St. Louis (SIU-ESL) campus was built, she was commissioned to create the beautifully sculptured turtles which adorn the campus.  “A Whimsical View” can be seen at Lambert-St. Louis International at Gate A8.  To create this piece, which she describes as “a deconstructed quilt,” Mrs. Patterson-Petty was chosen as one of only nine artists to travel to Munich, Germany to study with the esteemed Franz Mayer & Co., known internationally for their glass artwork.

She has received many awards, such as The Grand Center Visionary Award, Community Art in Education Award, the NAACP Arts Award, a Community Arts Award, and many more.  In 2010, she was honored by her alma mater, Southern Illinois University at Edwardsville with the SIUE Wall of Fame Alumni Award.

A life-long resident of E. St. Louis and a graduate of SIUE with an M.F.A. in Textile Art and an M.A. in Art Therapy, Mrs. Patterson-Petty says that she has always wanted to be an artist.  She says of art, “To me, art is being able to take things that others throw away or discard and turn it into some things of beauty or some things of interest — just being able to take a mundane situation or a mundane thing and turn it into something viable and just give things life.” To fellow E. St. Louisans, she would advise, “Know Your History”; and rightly so as it is filled with Legends such as Edna Patterson-Petty, your Local Legend.